There are stereotypes in the world that in the “era of developed socialism” architecture was boring. Art critics Shapiro-Obermayr and Alexander Vakhter decided to refute this statement. They gathered an exhibition “Soviet Modernism 1955 – 1991”, where they showed the western audience the non-standard aspects of the architecture of this period. One of the central exponent of the exhibition was a picture of a 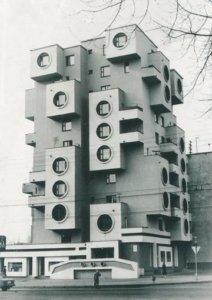 Place of design process : Architectural complex workshop No. 4 of the Mogilevgrazhdanproekt Institute.

This is a residential 9-storey house with a shop on the first floor. Apartments in it are one-room and three-room, two-level.

At the photo exhibition “Soviet Modernism 1955-1991. Unknown stories “, held in the Capital of Austria, from November 2012 to March 2013, a picture of the facade of the Bobruisk” birdhouse ” (took second place. The exposition was located in the Viennese center of architecture (Architekturzentrum Wien) and showed the western viewer the unusual and non-standard aspects of Soviet architecture of the era of “developed socialism”.

One of the ties, which generates new meanings and tasks…